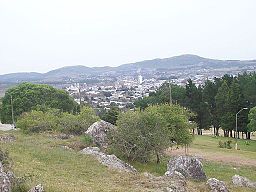 With roughly 3.3 million people as of 2013 estimates and consistently gaining attention as one of the world’s fastest developing nations, establishing a local presence in Uruguay could be a smart move. One of the best ways to tap into this market is with a Uruguay virtual number.

Why Set Up a Uruguay Virtual Number?
Uruguay is a representative democratic republic with a freely elected president – and a growing, free market economy. Its economy has an export-heavy agricultural sector with soybeans, horse meat, greasy wool, and beeswax among its main exports.

The Port of Montevideo handles well over 1 million containers each year, and Uruguay has the one of the most developed telecommunications systems in Latin America.

[dropshadowbox align=”center” effect=”lifted-both” width=”300px” height=”” background_color=”#FFFF99″ border_width=”1″ border_color=”#dddddd” ]Setting up a Uruguay virtual number allows your business to appear as if it is operating inside of Uruguay. It’s a low-cost way to get started in the Uruguay marketplace.[/dropshadowbox]

For example, if you offer import/export consulting services to the agriculture industry, having a local Uruguay virtual phone number would allow your clients in Uruguay to call you directly using a phone number that makes it appear as though your office is just down the street. Your clients may feel more comfortable working with someone with a local presence – and they’ll appreciate being able to dial a local or toll free phone number.

How Your Uruguay Virtual Number Works
When you get a local or toll free Uruguay virtual phone number, you are getting what’s known as a remote call forward number. The number itself is local to Uruguay so callers do not need to be concerned about international calling costs. The Uruguay virtual number, however, rings to the phone line of your choice – and your “ring to” phone can be located virtually anywhere in the world.

For example, you could set up your Uruguay virtual number to ring to:

The options are practically unlimited! In fact, you can change the ring to number as your needs change or even program a different destination based on the time of day it is in Uruguay.

Virtual Uruguay phone numbers come with a variety of features and options such as auto attendant, time of day forwarding, local ringtones, rollover minutes, and more. You can even set up an optional call recording feature where all of your calls from your Uruguay virtual number are automatically recorded.

What do you think?

We’d love to hear about your experiences. How have you used virtual phone numbers in Uruguay or other nations?