Imagine a Uruguay exporter who ships items to distributors in Brazil, Argentina, the United States, and the United Kingdom. 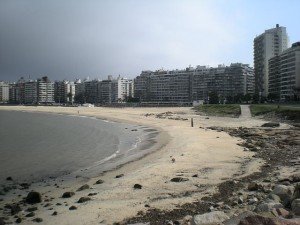 Worldwide conference calls may seem like the realm of big, international conglomerates residing in high-rise office buildings equipped with the latest PBX systems, but they aren’t necessarily.

Imagine a Uruguay exporter who ships items to distributors in Brazil, Argentina, the United States, and the United Kingdom. He would like to discuss a new product’s launch strategy with representatives in each of these three countries.

Though there are some minor differences based on local markets, the overarching strategy is consistent enough that a group call makes the most sense.

However, the exporter doesn’t have a fancy PBX system capable of handling a four-way conference call. He’s also concerned about how the distributors might react to having to dial a phone number in Uruguay, especially if the call runs an hour or more as he expects it to.

The exporter does some research and finds out that he can sign up for a service that allows him to host international global conference calls in Uruguay without a contract and without monthly fees.

Among the many other benefits he discovers:

He’s nearly ready to sign up, but he realizes that this Uruguay global conference call is likely to be a one-time need. As he continues to explore American International Telephonic’s website, he realizes that the no-contract Uruguay conference calling plan is truly a pay-as-you-go plan. He can host this one call, pay for the minutes used, and never be billed another penny.

The exporter signs up and schedules his group audio call, a process that took mere minutes. He then invites his distributors from Brazil, Argentina, and the United States. Each participant receives the Uruguay conference call details complete with a local or toll free number for their own countries.

At the appointed time, the distributor in Brazil dials a local number and joins the call. The distributor in Argentina connects to the call using our Connect App (she’s used our service in the past and loves the mobile app). The U.S. distributor dials a toll free number. But the caller in the United Kingdom seems to have forgotten about the conference.

Remembering that the service has a moderator dial-out feature, the exporter dials the UK distributor on his cell phone and immediately joins him in the conference. Everyone is connected, and the sound quality is exceptional.

The exporter records the Uruguay conference with a quick key press and leads the team through a productive conversation. The call ends after about 45 minutes.

Consider that this conference call will result in a valuable economic transaction for the exporter, is it worth $26 dollars versus meeting face-to-face in a mutually acceptable city with airfare, hotel and other expenses for all?

This is but one of many ways our customers use Uruguay global conference calls to connect with others around the world. We’d love to hear your other examples.