According to Telecom Pioneer Strowger’s patent application, the invention would “…provide means whereby a person at one station may make a connection with any other station in the system, by the aid of electrical appliances, without the assistance of an operator at the central station. 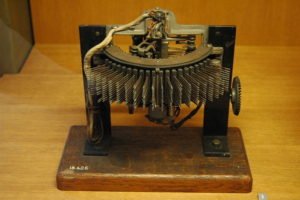 Origins of Telecommunications: From Undertaker to Telecom Pioneer, Strowger’s Switch

Imagine a telephone system where callers have to first interact with a third party in order to speak with your business.

In theory, that third party has the power to either connect the caller to your company or not. For much of the history of telephone service, a third party did indeed have to connect callers to their intended recipient. The interactions were brief and to the point, handled by telephone operators who connected calls manually by moving cables to the appropriate line on a switchboard.

Operators were used from the 1880s through the 1940s until sophisticated automatic switching systems were developed that made their jobs obsolete.

However, back in the late 1880s, a Kansas City undertaker, Almon Strowger, reportedly believed that a crooked telephone operator (who was the wife of a competitor) had steered his funeral customers to her husband, an undertaker, prompting him to invent the first automatic dialing system. His system, known as the Strowger Switch, was intended to cut the middleman, or in the case of telephone operators who were predominantly female, woman, out of the conversation.

According to Telecom Pioneer Strowger’s patent application, the invention would “…provide means whereby a person at one station may make a connection with any other station in the system, by the aid of electrical appliances, without the assistance of an operator at the central station.”

His invention used push buttons to generate pulses that could move electromagnetic contacts to select a phone number directly without operator assistance.

While pushbutton phones today are practical and easy to use to dial a number, Strowger’s device was impractical. For example, if one of the digits of the phone number happened to be a 9, you’d have to push the button nine times! Strowger’s patent application provides an example, dialing telephone number 315, that illustrates the complexity even further:
“…do so by pressing the key marked G three times, then the key marked 11 once, and then the key marked I five times.”
Thus, dialing a simple number, 315, would actually require pressing the following sequence of alphanumeric keys: G-G-G-11-I-I-I-I-I.

With a patent in hand, Telecom Pioneer Strowger effectively switched gears and careers, forming a company that would later be known as the Automatic Electric Company.

Over the years, the switch evolved, becoming commercially viable thanks in large part to the company’s invention of the rotary phone under the technical leadership of Alexander E. Keith.

Further advancements in automatic switching were made by Automatic Electric Company, AT&T, Bell Labs, and other inventors in the decades that followed, which ultimately resulted in eliminating telephone operators.