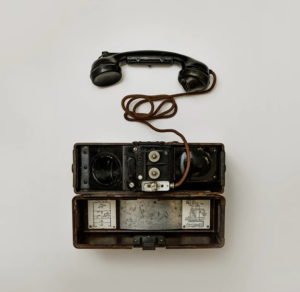 The invention of the telephone prompted other innovations in communications out of necessity, the so-called mother of invention. Early telephone calls were limited to short distances due to the physical wires they were transmitted over and the inherent weakness of the signal. To make a longer distance call, the call would be routed over a network of wires from one telephone office to the next until the destination was reached, all manually switched by telephone operators.

Innovations, such as the loading coil which strengthened electronic signals and later an amplifier, helped to extend the practical distance of phone lines. In early 1915, the first transcontinental telephone call between New York and San Francisco took place. Buy this was still not adequate for international telephone calls.

Though this system worked fine on land, assuming the appropriate infrastructure was in place, it relied on physical wires. While creating physical connections between the United States and its neighbors Canada and Mexico was certainly doable, connecting the United States to Europe required a different approach.

Undersea cables, which had been used successfully for telegraph transmissions since the mid-1800s, were deemed too impractical for voice transmissions of international telephone calls. Not only was the prospect of laying a cable across such a vast expanse of ocean daunting and expensive, telephone signals tended to weaken quickly, requiring extensive amplifiers and repeaters to boost the signal. These components barely existed on land and were definitely not capable of working underwater.

Meanwhile, back on land, shortwave radiotelephone service emerged, eventually evolving into a series of microwave towers which connected long distance phone calls across the United States via microwave signals. But again, with each station located 30 miles apart, this solution wouldn’t work across an ocean.

The dream of an undersea cable didn’t die. By 1956, it had finally materialized, adding 36 “talking channels” between North America and Europe. This first deep-sea cable, known as the Transatlantic Telephone Cable System 1 (TAT-1), consisted of twin cables with one transmitting voice conversations east and the other transmitting them west. This undersea cable made use of fifty-one 150-foot-long flexible, watertight cylinders on each of the twin cables. Each cylinder contained about 60 components including repeaters and electron tubes.

After the first ceremonial call took place over the transatlantic cable, the cable opened for business. International phone calls between USA and UK cost $4 per minute during business hours and $3 per minute on weekends and evenings in 1956. That’s the equivalent of more than $30 per minute in today’s dollars.

TAT-1 was a success for more than 20 years with just one outage on record, a 3-day outage caused by a broken line off the Scottish coast. It was finally taken out of service in 1978 after becoming obsolete due to the arrival of higher-capacity undersea cables.

This story doesn’t end with the success of undersea transoceanic cables, however. Communications satellites arrived in the late 1950s and early 1960s, creating global telecommunications links by 1969.

Today, international telephone calls travel over the air, under the sea, via space, and even through the Internet using VoIP. Costs have fallen dramatically to mere pennies per minute while quality has improved significantly to the point where callers sound as if they’re in the same room and not half a world away.